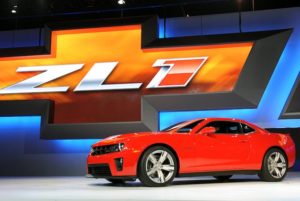 GM has finally released the info we have all been antisipating: The 2012 Chevrolet Camaro ZL1 will be officially rated at 580 horsepower and 556 pound-feet of torque.

Al Oppenheiser, chief engineer of the Camaro, stats, “The Camaro ZL1 delivers supercar performance and technology in the sports-car segment. For sheer power, the ZL1 delivers more horsepower than a Ferrari 458, more torque than an Aston Martin DB9 V12, and a better power-to-weight ratio than a Porsche 911 Carrera GTS.”

This supercharged engine is the most powerful engine ever installed in a Camaro – beating the 1969 Camaro ZL1’s 427-cubic-inch V8 rated at 430 horsepower. It will be available with either a six-speed manual gearbox or a six-speed automatic fitted with Drive, Sport and Manual modes for increased driver involvement.

To get all that power to the ground GM engineers designed a Performance Traction Management and third-generation Magnetic Ride Control. Magnetic Ride control uses Magneto-Rheological fluid in the shocks and is computer controlled with readings that adjust damping a staggering 1,000 times per second, and has Tour, Sport and Track settings. It contains five distinct modes appropriate for everything from rain to race, which is calibrated for use at drag strips conditioned with VHT.

Ford already announced the 2012 Mustang Shelby GT500 is rated at 550 horsepower and a newly updated 2013 is rumored to boast over 600 horsepower. We just have to wonder if Dodge plans to throw an a new animal into the continued muscle cars wars.