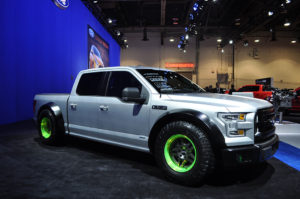 The SEMA show has continued to grow every year filling every nook and cranny at the Las Vegas Convention Center. We obsessively covered the show with over 1100 car pictures and truck pictures available to view in our 2014 SEMA show gallery. The show is bursting at the seems with show cars, trucks and every imaginable products available for them. The trade only show is not open to the public, but does allow public viewing of the vehicles outside the convention center buildings. This year saw increased presence by pickups and Jeeps showing the growing trend by consumers. 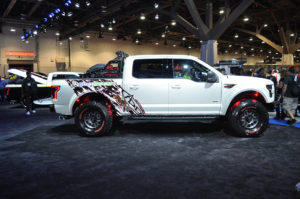 SEMA allows vehicle manufactures to showcase news models and customizing options available as soon as a vehicle is released for sale. This year Ford came out strong with the 2015 Mustang and 2015 F-150 at the Ford and other aftermarket vendor booths. Addictive Desert Designs created an off road beast for those wanting a 2015 Ford Raptor model that new came.

The 2015 Ford Mustang appeared to be one of the strongest showing new vehicles we have seen at SEMA. Many customised 2015 Mustangs were at the Ford booth and spread across the show. Extensive car pictures from SEMA 2014 are in our gallery. 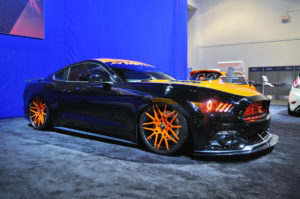 Other new vehicles included the 2015 Chevrolet Corvette spread throughout the show floor and the return of the resigned 2015 Chevrolet Colorado pickup. BDS suspension, a Fox owned company showcased their kit for the new Colorado. The truck looked impressive for the smaller sized truck market and appeared as a Toyota if you cover the lights and grille. The new Colorado being larger than the old model would really be impressive with enlarged fenders and longer travel suspension catering to the large off road truck consumers. 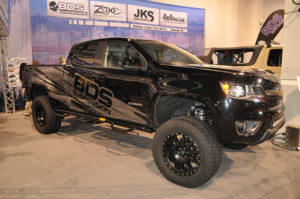 Lots of new products were on hand like a new LED light bar with a GoPro camera housing built in by Rigid Industries. A great way to firmly secure your Gopro without hunting for that perfect suction cup mounting position. The Rigid Industries GoPro LED light is only available in the small size making it perfect for cars on the track, trucks off roading or recording your travel adventures.

Want to build a Mopar hot rod, muscle car or drag car and looking for performance solutions? Mopar Performance has your answer with a 572 cubic inch HEMI crate motor. The Gen II crate 572 HEMI is available with 650 HP and 660 ft-lbs of torque of natrually aspirated goodness. 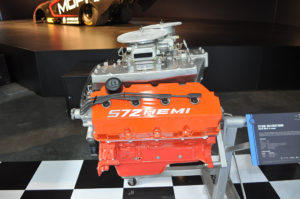 We have noticed a rapid increase in Ford Raptor products from bumpers, fenders and upgraded suspensions. Ford having sold about 60,000 Raptors from 2010 - 2013 (no totals for 2014 yet) has found many people still yearn for increased performance vehicles. Companies offering suspension kits for the Ford Raptor include Addictive Desert Designs, Camburg, Icon, Outlaw Offroad, Ready Lift, Rogue Racing, RPG Offroad, SDHQ and Special Vehicle Concepts. With replacement spindles, tie rods, A-arms, shocks and long travel kits the Ford Raptor can be greatly improved. Check out the new rear cantilever suspension kit from Rogue Racing offering 20" travel completely under the bed with no need to cut shocks through your stock bed. 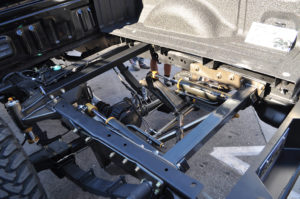 For your garage Boxo had a colorful display of modern looking toolboxes. While not large heavy duty service tech type boxes, these would be great for the home mechanic. They are available in a wide array of colors like a bag of skittles. Offered with easy gliding ball bearing movement drawers, side storage and modern radius looking cabinet they are sure to improve the looks of your garage. 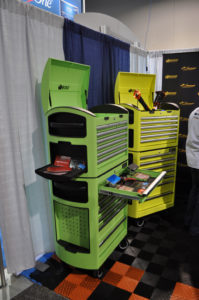 This was a great year for SEMA and one of the biggest yet. I must say this was the most organized SEMA show to get in and out of. We will be testing new products offered to us from exhibitors of the 2014 SEMA show soon and we will let you know how they perform as we put them through our tests.