Tires are used in our everyday lives but there is no one perfect tire to varying surfaces we encounter. The best tires for one condition cannot complete with the best for another condition whether its wet, dry, performance or dirt. Tires utilized for off-roading have greater demand as they tend to be in unforgiving terrain and sometimes isolated areas. Adventurers want a tire that will keep them planted on the trail and propel themselves from any sandy, muddy or other challenging terrain.

I was familiar with the Falken Wildpeak MT having seen them heavily used in Baja in varying surfaces. The have an impressive set of features in their design to provide the best off-road experience. The Wildpeak MTs have an aggressive lug pattern designed to be quieter than other brands with rugged and rigid tread blocks to enhance stability and prevent stones from being trapped. The sidewalls have their proprietary Duraspec three ply with turn-ups and aggressive upper side lugs I usually call side-biters to help grab and provide additional protection. Falken incorporated heat diffuser technology in the lower sidewall to protect internal tire components and assure cooling in the crucial areas when towing, hauling or low-pressure performance driving.

I was given the opportunity to tryout Falken’s aggressive Wildpeak MT 37” tires on our Ford Raptor. The initial street use proved to be better ride and quieter than our previous mud terrain tires. Shortly after the install I was able to put them to some off-road abuse in the Nevada and California desert mountain areas with a group of avid off-roaders from Expedition X Offroad. Starting North of Reno Nevada, we traveled through parts of the Black Rock desert traversing hill climbs, lava rock covered roads, high speed dirt trails and finishing up with the dry lake bed famous for the annual Burning Man festival. I was impressed how well the tire handled fast driving over sharp lava rocks without cutting up the lugs severely like past tires I have experienced. One area including a slightly rocky hill climb with a silt layer at the top with a required sharp left when cresting. The tire aggressively conquered the rocks, powered through the silt and ripped into the left-hand crest without issue. Shortly afterwards a buddy stuck himself in a washout requiring a rescue and which point we hooked up and pulled without any tire slippage. The tires held excellent in running trails at high speed even cornering it became hard to break traction. On the highway they continued to ride smooth with excellent grip. I could easily side corners with others while the Wildpeaks gripped very well requiring extensive throttle to break free.

Fast forward to several more miles off-roading at high speeds, rock crawling and dirt trails the Falken Wildpeak MT has continued to impress us. A rock crawling section allowed us to test slow speed grip traversing boulders without slippage. You might ask how the Falken Wildpeak MT handle extreme impacts and I was able to test without warning. Running a narrow canyon in a slide into the side of a mountain broke my factory spindle the Falken taking the blunt force on the sidewall had no loss of air. I was amazed what an impact the tire survived and furthered my impression with Falken tires. 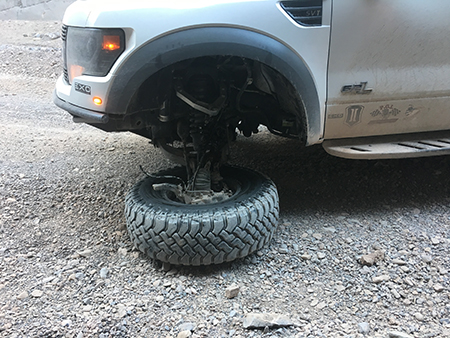 I have found with the Wildpeaks I can run familiar trails at higher speeds and better brake grip control. I was able to test in some snow and mud conditions and equally impressed at the ease of movement without ever getting stuck. How much do I enjoy these tires? Well I bought two as spares for my tire rack and have not needed them but confident that in any unforeseen event I have high quality off-road tires standing by. After several thousand miles I definitely found my favorite off-road tire. Specs and size information available at Falken Tire

Don’t Get Stuck use Trac-Grabber

Tires are used in our everyday lives but there is no one perfect tire to varying surfaces we encounter. The best tires for one condition cannot complete with the best for another condition whether its […]