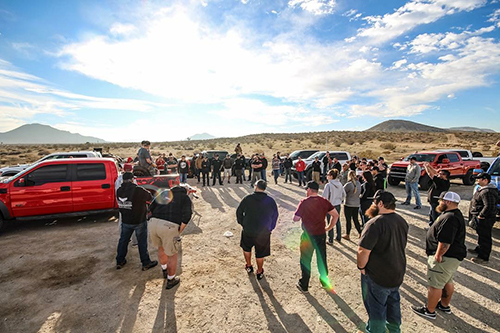 Our first trip with club Expedition X Offroad on the Rip 2 the Strip 2 event was a great success. This is a first rate group of people with everyone helping each other as mishaps happen along the way. Everyone drove within their limits and there were no serious issues making it a great success. While there were some flats, broken exhaust and a small electrical fire on a modded truck, everyone was helped through and made it home.

The trip started at the edge of Victorville California and headed to the West edge of Vegas near the red rock mountain area. The majority of the group stayed at the Hard Rock Casino where we celebrated a great day one of the event. Day two was a return trip starting in Henderson Nevada and following a different route. Recap on Video page.