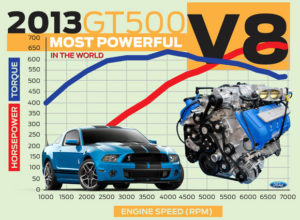 Once again Ford wants to assure us the Mustang sits on the top of the performance ladder. While the battle of the Detroit three continues to be a close race, they are becoming more viable alternatives to sports car offerings from Europe and Japan. The newest bohemoth is the 2013 Ford Shelby GT500 which is now officially the world’s most powerful production V8. The 2013 GT500 sports a supercharged 5.8-liter V8 producing an SAE certified rating of 662 horsepower and 631 lb-ft of mind boggling torque. That will shurely suck your back side into its command chairs.